If you're going to be here a while I'd suggest you get out an explore a bit! This post is meant to give you the general lay of the land, highlighting neighborhoods and districts that are generally most interesting to visitors, and is not an exhaustive guide. This mostly means places with collections of restaurants and/or shops, with interesting architecture or history as an added bonus.

First take a look around this great interactive map produced by Cleveland's Visitors Bureau and then read on if you're interested: 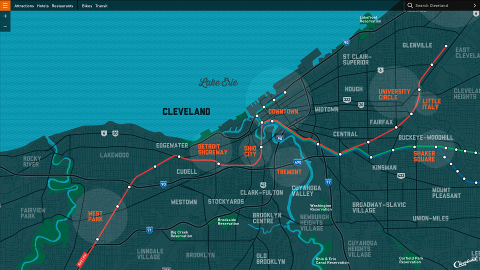 Downtown Cleveland generally includes the core of the city East of the Cuyahoga river to around E. 30th.

If you're staying near The Cleveland Convention Center you're here. Also in this area are civic buildings like City Hall and courthouses and multiple open grass areas ("The Malls".) Go for a walk and check out The Free Stamp.

That tower in the PyCon 2018 logo? That's Terminal Tower, named for the rail terminal inside. Tower City Center is a shopping and restaurant center in the first few floors of the building. Public Square sits directly in front of the building and is the center point for the East/West street numbering system. The Soldiers' and Sailor's Monument is free and worth a stop if you're walking by. If you want a bird's eye view of the city, check out the Terminal Tower Observation Deck (Sat & Sun only, reservations required.)

This area directly across The Shoreway (Highway) from the convention center includes the Rock and Roll Hall of Fame and Museum, The Great Lakes Science Center, the football stadium and Voinovich Park.

Gateway includes the baseball stadium, basketball arena, and surrounding bars and restaurants. Nearby is E 4th, one of the hot night spots in Cleveland, with multiple great restaurants, comedy clubs, a speakeasy, and a bowling alley.

Playhouse Square is Cleveland's theater and performing arts district. Visit at night and you definitely won't miss the GE Chandelier over E 14th and Euclid.

The collection of old warehouse buildings in this district have been converted into residential and office space with restaurants and shops on the first floor along W 6th and the adjacent blocks.

Both sides of the Cuyahoga River, known as The East Bank and The West Bank, are former industrial areas that have grown into residential and entertainment districts over the years. If someone just says "The Flats" they typically mean The East Bank which has numerous restaurants, bars, and entertainment venues. The West Bank has the Greater Cleveland Aquarium, bars, and music venues.

Everything West of the Cuyahoga river.

Ohio City is just across the river from Downtown and is my recommendation if you only have time to make it to one neighborhood outside of Downtown. The West Side Market, multiple breweries, many restaurants and shops are all here. Check out the neighborhood guide for more.

Further West past Ohio City is the Gordon Square Arts District which has boutiques, galleries, shops, and restaurants.

Tucked-in just East of Ohio City and South of Downtown is Tremont, a residential neighborhood with an array of worthwhile restaurants and shops.

I live in Lakewood, the first suburb West of Cleveland. Lakewood is a dense residential city with many great places to visit on Detroit and Madison Avenues. One of my favorites is Mahall's 20 Lanes, a bowling alley opened in 1924 and now including a bar and music venue.

Everything East of Downtown (starting at ~E. 30th)

Cleveland Heights is just East of Cleveland and has two of my favorite neighborhoods to visit when I lived on that side of town: Coventry and Cedar Lee.

Shaker Square in Shaker Heights is a historic city square with shops and restaurants and is directly accessibly by rail from downtown.