Over the years as friends visited the Cleveland area, I've compiled notes with suggestions for what to do and see while in town. Since PyCon is coming to Cleveland in 2018-19 I figured it might be helpful to clean up my notes and share them as a more personalized guide from the point of view of another Pythonista. I hope you find it useful!

I was born and raised in Lakewood, OH, an inner-ring suburb of Cleveland. Growing up I was instilled with what I think was a common duality in the area at the time: strong pride in my city and a desire to get the heck out. I moved to the East Coast (Wilmington, DE, near Philadelphia) and didn't look back. In the 9 years I spent in DE I went back to school to finish my bachelor's degree, met and eventually married my lovely wife, and got a job doing computer stuff (with some Python!)

After a while we started talking about moving and we always seemed to gravitate toward the Pacific Northwest. We'd visit family in Cleveland occasionally and over the years we started to notice that a lot of the things we liked about other cities were here: walkable neighborhoods, locally-owned shops, great food, local beer! Plus housing was a lot more attainable (seriously, take a look at county home values...) Then in 2011 while still fully intending to move to the PNW I was given an opportunity to take a job in Cleveland and I went for it. Since moving back I've tried to treat my city as a visitor would, exploring new places and appreciating what the city has to offer.

Things to Know About Cleveland

Other posts will go into more detail things to see and do but for now I will give you my top 3 places to go when visiting Cleveland:

The West Side Market

The West Side Market is a historic indoor/outdoor market with produce, meats, cheeses, bread, pastries, and prepared foods. For many people in the neighborhood it is their primary source for groceries yet it has also become somewhat of a tourist location. It's a perfect place to get a sense of the cultural mix of the city. Spend some time just looking around and then grab a bite to eat. I recommend skipping the line for gyros and instead grab a bratwurst at Frank's, falafel at Maha's, or some smokies at Czuchraj (SHOO-cray) Meats. 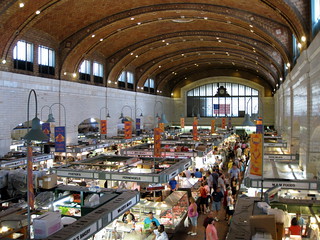 The Cleveland Museum of Art

The Cleveland Museum of Art was built during Cleveland's heyday in the early 20th century and maintains a world-class collection. Founded with the idea that a museum should be "for the benefit of all the people forever," admission to the The Cleveland Museum of Art is free so don't hesitate to drop-in for a quick visit to a gallery or two if that's all the time you have. If you're able and museums are a priority for you, I recommend splitting your visit over a couple days and checking out the other museums while you're in the University Circle area. If the weather is ok, take a walk outside and make note of the damaged cast of Rodin's The Thinker with its interesting history outside of the South entrance. 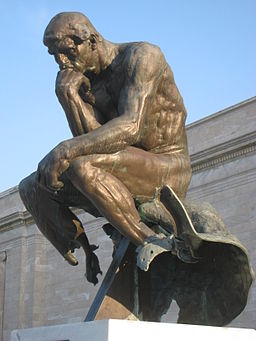 Sokolowski's is a restaurant. It's kind of a like a Polish grandma's house — but with a bar, a piano player, and a cafeteria line in which the desserts come first. Trust me on this one. If you go during the dinner rush be prepared to stand in a line that winds back around through the dining room — but don't worry; it goes fast. Be sure to check the specials. No matter what you choose you'll leave satisfied.